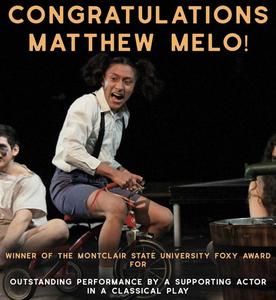 Congratulations to JMSA Theatre program's production of EURYDICE for taking home the Montclair State University Foxy Award for Outstanding Performance by a Supporting Actor in a Classical Play! UCHS's Matthew Melo won the award for his role as Nasty Interesting Man, under the direction of Anthony Gusevich.
The JMSA production of EURYDICE was nominated for seven Foxy Awards this year, which is more nominations than any UCHS or JMSA show has ever been nominated for since UCHS opened.
The Foxy Awards recognizes excellence in the production of high school and middle school straight plays throughout New Jersey.